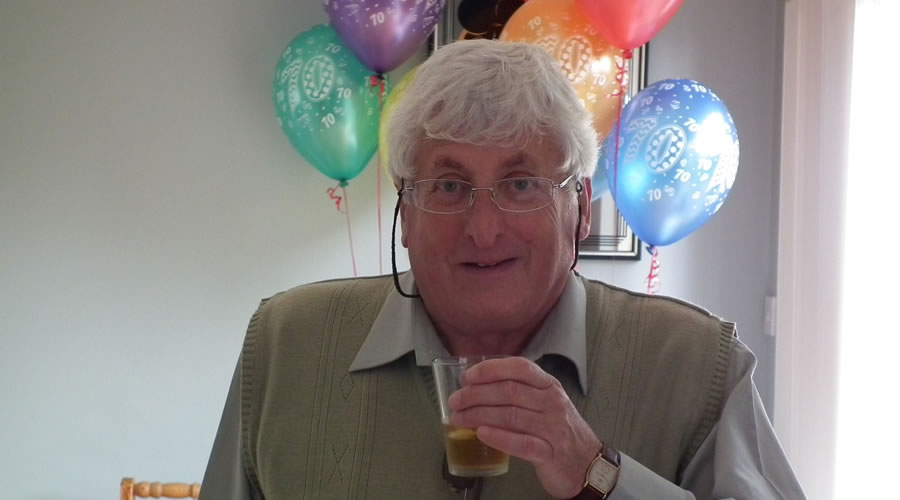 With the sad passing of Dick O’Rafferty, Leinster Badminton has lost one of its greatest stalwarts, as player, volunteer, manager and archivist.

Born in Dublin and educated in Gorey, Co.Wexford, Dick first came to notice when playing in the early juvenile tournaments in the mid-1950s, winning several events and beating more fancied players along the way. On leaving school, he secured employment in Dublin and moved to live there, where he met and later married his charming wife, Mona, who has been an immense support to him throughout his life.

He joined Pembroke Badminton Club and quickly rose through the ranks to the first team, playing in the   Senior League, the top section at the time. His partnership with Jimmy Dolan became the scourge of their opponents – everything was returned as if playing against a barn door – and they won many a match by wearing their opponents down. Dick progressed to the Midland (now Leinster) Branch Junior Interprovincial Team and subsequently to the Senior Team. He later became a qualified coach, focusing on developing young players, and was a member of the Executive Committee of the Branch in the 1970s. He served as President from 1982 to 1985 and was later a Trustee, for all of which the Branch honoured him with Life Membership.

However, it was as General Secretary that Dick really made his name in Leinster Badminton. He took up this role following the retirement of the late Claude McLindon in 1989. He gave his usual energy to the job and oversaw many management and administrative improvements. He brought a particular focus to the game outside Dublin and, along with the late Michael Donnelly, devoted much time to the development of the sport in the counties, especially the expansion of the Intercounty Leagues. At any significant event in Leinster, Dick was always in the background to provide support.

Dick’s most enduring legacy to badminton is undoubtedly as Curator and a Trustee of Badminton Museum Ireland (BMI), which he established with others from 2008 onwards. Such badminton records as existed were scattered across the country and he devoted enormous enthusiasm and energy to sourcing and assembling artefacts, trophies, publications, photographs and records. After endless perseverance and discussion, a home was finally found for BMI in Baldoyle Badminton Centre and opened in 2018. In the interim, Dick developed an extensive database and website, wrote articles for several publications, including one for Irish Archives entitled “The Accidental Archivist and the Development of the Badminton Museum of Ireland”. He was invited to give a presentation to a seminar at the GAA museum in Croke Park in 2019. His website and publications attracted great international interest and he received many enquiries from around the world, including a visit in 2019 from delegates in the Japanese Association. As a collector of history, Dick made history.

Throughout his badminton life, Dick always conducted himself in a courteous and gentlemanly manner, which gained the respect of all who knew him. Never ruffled by anything, his gentle demeanor popularised him throughout badminton in Ireland and further afield. He maintained his interest in the sport to the very end, which came a couple of months after his 80th. birthday, following a debilitating illness, which he bore with his usual stoicism. The sympathies of all who knew Dick go out to his wife, Mona, his three sons, David, Stephen, Simon and their families. He will be greatly missed by the entire badminton community.

Calendar powered by The Events Calendar

View Calendar
MORE EVENTS
We use cookies to ensure that we give you the best experience on our website. If you continue to use this site we will assume that you are happy with it.Ok
Go to Top